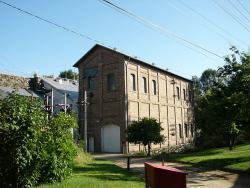 "The State [of California] agreed to construct the dam using convict labor for which consideration the State received a grant of land for the construction of a prison and water power rights from the impounded water ...; The work progressed slowly during the dry season by disinterested convict labor using hand tools since the use of machinery was forbidden ...;"
- Historic Landmark Nomination Form, 1974

In 1895, Folsom Powerhouse transmitted 11,000 volts of electricity over a 22-mile stretch to power the streetcars of the Sacramento Electric Gas and Railway Company. Folsom also provided the long-distance, high voltage, three-phase transmission service for municipal and industrial power needs.

The success of this early system proved that low-cost hydroelectric energy could be provided to distant population centers. It served as an early prototype for modern hydraulic power generation and transmission facilities.

Although the lower powerhouse was taken off-line in 1920, the main powerhouse continued in operation until 1952. At that time, the dam was removed to make way for the new Folsom Dam. The original powerhouse is now part of the California State Park System.