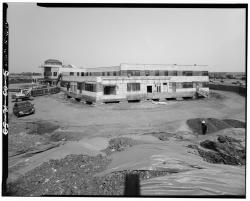 The new airport featured the nation's first hard-surface runway-1,600 feet long, covered with asphalt-and a 120-square-foot hangar. Newark was designated as the airmail terminus for the eastern U.S. in 1929 and scheduled passenger service also started then. By the fall of 1930, it was the world's busiest commercial airport. Today, expanded many times over, Newark Airport continues to serve millions of passengers and transfer tons of cargo each year.

Tags
Airport
The Newark Airport, a pioneering major airport with its 1,600-foot runway, was one of the first hard surfaced runways to be constructed at any municipal airport in the United States and, as such, it served as prototype for today's modern airport runways.
Image Caption
"(D)etails of traffic control have been so completely worked out as to eliminate any possible conflict between scheduled air line operations and racing activities..."
- Major John Berry, An Air Terminal Extraordinary, 1930