Constructed on 1,040 acres just 10 miles southwest of the city center, the Cleveland Hopkins Airport was the first major airport in the world to provide an integrated system of paved landing surfaces, lighted runways, and a terminal complex consisting of hangars and operating facilities. Overseen by city manager William Hopkins and Major "Jack" Berry - an engineer on loan from the U.S. postal service who eventually became the city's first Airport Commissioner - the project at first was called "Major Berry's Folly" by local residents because of its outlying location.

Throughout the 19th and early 20th centuries, Cleveland had maintained a central position in the shipping of freight, linking Great Lakes industry with the inland river system. The city's early participation in the dawning of commercial flight was intended to bolster its role as a major link in freight and passenger transportation. The airport's formal dedication on July 1, 1925 featured the night arrival of the first transcontinental flight in the history of airmail service.

The Cleveland Hopkins Airport is the first major municipal airport to provide an integrated engineered system of paved landing surfaces, floodlit runways, and a terminal complex consisting of both operational buildings and hangars. 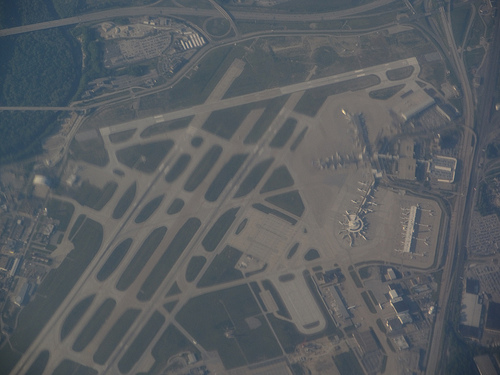