From 17 November to 23 December 1947, Walter H. Brattain and John A. Bardeen -- under the direction of William B. Shockley -- discovered the principle of the transistor and developed and demonstrated a point-contact germanium transistor.

The transistor has been cited as the most important invention of the 20th Century.  It’s hard to imagine any field of human endeavor where it has not had a profound positive impact from communications, computing, transportation, medical, etc.

The invention of the first working transistor set the stage for all subsequent solid-state device developments. Although Julius Edgar Lilienfeld successfully patented a number of field-effect transistor configurations starting in 1925 and into the 1930’s, there is no indication that he ever produced any working models. If he did, they would not have worked very well due to the state of germanium and silicon crystal growth at that time. By 1947, advances in germanium semiconductors made it possible for Bardeen and Brattain to make the first working point contact transistor. 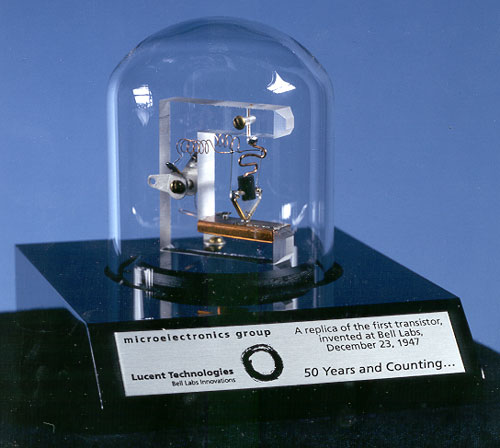 National Archives
In 1997 Lucent Technologies created this replica to commemorate the 50th anniversary of the invention of the point-contact transistor at Bell Labs in December 1947.
Address:
Building 6
600-700 Mountain Avenue
Murray Hill, NJ, USA