The roof system of this building, designed by Lev Zetlin and opened in 1960, was the first of its kind in the world. Before the mid-1950's, the use of long-span cable structures was generally limited to suspension bridges. The only other significant cable roof structure preceding the Utica Memorial Auditorium was the North Carolina State Fair Livestock Judging Pavilion, completed in 1953. Now known as Dorton Arena, it was the first cable suspended roof and employed a hyperbolic paraboloid "saddle" system, in which the cables were arranged in a single-layer rectangular grid that was stretched between two concrete arches. This system attained its stiffness only from the tension in the cables and from its saddle shape. The arrangement proved to be inadequate and later required the addition of internal ties to prevent wind-induced vibration problems.

A bicycle-wheel roof system similar to that of the Utica Auditorium was actually employed at the same time by architect Edward Durell Stone for the American Pavilion at the 1958 Brussels Universal and International Exposition. This pavilion had a longer span than the Utica auditorium (350 feet vs. 250 feet) and utilized a similar bicycle roof system, but it supported a lighter plastic outer roof, instead of metal roof decking, and lacked Zetlin's use of struts between the cables.

The Utica Memorial Auditorium uses two layers of radially arranged cables spanning between an outer compression ring and a central tension hub like bicycle spokes.  The two layers of cable are, however, unlike bicycle spokes, separated by compression struts to give a domed roofline. This arrangement never experienced wind-induced vibration problems as did the Dorton Arena. The cable suspended roof design was lighter than a conventional roof structure making the construction of this facility more feasible at a site that had very poor soil conditions. In addition, the high-strength cable roof cost much less than an ordinary structural steel roof and the 250-foot clear span eliminated the need for interior columns providing spectators with an unobstructed view of auditorium events.

Zetlin's cable roof was the precursor to today's modern dome designs.  When cables are used for a roof structure now, it is common to see both double layers and connecting struts. David Geiger's innovative "cable dome" system used for the gymnastics venue at the 1988 Seoul Olympics was based upon Zetlin's design. 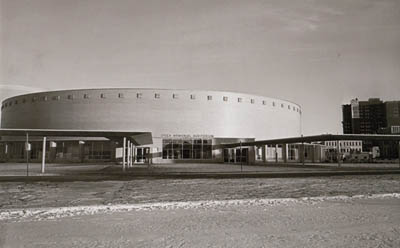