1. Self-propelled combine.
2. Combine powered by a straw-burning steam boiler - it was "fueled from the land".
3. Tractor that traveled forward for plowing and in the reverse direction for harvesting.
4. Traction engine with power turning, using differential gears instead of conventional wheel clutches.
5. "Power Take-Off", using steam from the traction engine boiler to power an independent engine that drove the harvesting mechanism.

In 1888, equipped with a 40 feet header, and using nighttime lighting, one of Berry's combines harvested more than 100 acres per day. Berry built six such machines, establishing the advantages of enhanced performance, reduced costs and good maneuverability for large, self-propelled combines. Many features of these machines were adopted by West Coast manufacturers after Berry went into politics, and have influenced design of later combines, both self‑propelled and towed. 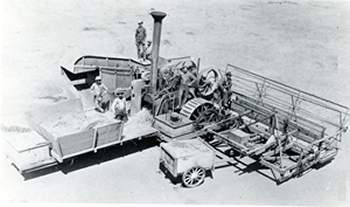