In the mid 1930's, the USDA Soil Conservation Service (SCS) realized the importance of hydrologic processes on agricultural fields and watersheds and determining their impact on soil erosion, floods, water resources, and the agricultural economy. In response, the SCS Hydrologic Division established experimental watersheds in Coshocton, Ohio, Hastings, Nebraska, and Riesel, Texas, and operated them until 1954 when the watersheds were transferred to the newly created Agricultural Research Service (ARS).

Research at these watersheds has contributed to many significant engineering advancements including: quantification of soil erosion prevented by agricultural conservation systems; development of the SCS "curve number method", Universal Soil Loss Equation (USLE), and watershed models such as SWAT; understanding of agronomic and environmental effects of tillage, fertilizer and chemical management alternatives such as no-till agriculture; and inventions such as the Coshocton wheel water sampler.  The three original watersheds established the foundation for the vibrant, national USDA-ARS experimental watershed network that to this day produces sound science and engineering to protect and manage the world's soil and water resources. 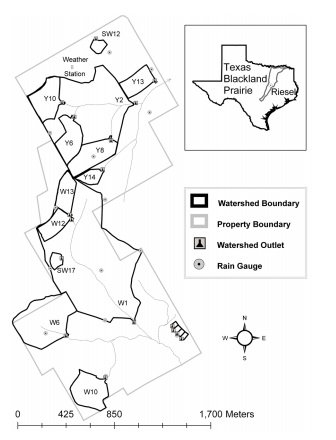