On June 30, 1857, James Oliver filed a patent application for chilling the wear face of cast-iron moldboard plows.  While pouring molten cast iron in sand molds he circulated hot water through chillers to regulate the rate of cooling. Oliver's control of raw material content and cooling produced moldboards with a very hard surface  and a softer, tough inner core for strength.  Their fine textured wearing faces of uniform hardness maintained a mirror polish and resisted rust. Sticky soils scoured freely on Oliver's plows, improving farmers' productivity.  By 1878, more than 170,000 Oliver chilled moldboard plows were being used around the world.  The Oliver Chilled Plow Works was constructed on this site in South Bend, IN, in January 1876.  It became one of the world's largest plow manufacturing plants, housing foundry, forge shop, engineering, woodworking, assembly, warehousing, and shipping  facilities. Plows and tillage implements were manufactured from 1876 to 1985. 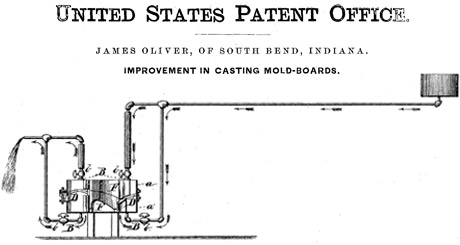