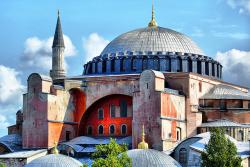 Immediately after the riots, Emperor Justinian, who ruled from 527 - 565, ordered the church rebuilt. The new building was inaugurated on December 27, 537. Architects Anthemios of Tralles and Isidoros of Miletos most likely were influenced by the mathematical theories of Archimedes (ca. 287-212 B.C.) and Heron of Alexandria's writings on vaults and arch support (first century A.D.).

Anthemios was born in the ancient city of Tralles in Asia Minor (in the area encompassed by modern Turkey) and probably studied in Alexandria, speaking Greek. An experimental scientist and theoretician, he easily assumed mastery over the technical aspects of architecture. Isidoros was born in Miletus (in the area encompassed by modern Turkey) and presumably received his education in Constantinople. An architect, engineer, and scholar, he probably worked as an architect-engineer with Anthemios assuming the role of senior partner. Although the two probably worked on several projects together, their only certain conglomeration occurred with the Hagia Sophia. They designed and built the major monument of Byzantine architecture.

The vast, airy central basilica, with its technically complex system of vaults and semi-domes, culminates in a high central dome with a diameter of over 101 feet (31 meters) and a height of 160 feet (48.5 meters). Its weight is carried by four great arches, which rest on a series of tympana and semi-domes, which in turn rest on smaller semi-domes and arcades. This complicated structural system was prone to problems: the first dome collapsed in 558, to be rebuilt in 562 to a greater height. Earthquakes and earth subsidence have also taken their toll on the building over the centuries. However, the surviving main structure is essentially that which was first built between 532 and 537.

The Hagia Sophia is a major monument of Byzantine architecture. All the traditional churches of the Byzantine, Slavic, Orthodox worlds, built over the past 1400 years descend in some form or other from this original design.