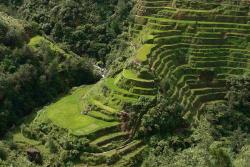 This is the oldest and most extensive use of terraces in the world. The 20,000 hectares of terraces represent a rearrangement of the Cordillera Mountain Range from bedrock to topsoil. The engineering principles of hydrology, sustainable development, and efficient use of water resources and irrigation are all embodied in the careful design of this ancestral land management program.

All studies by anthropologists and researchers point to the conclusion that the building of the rice terraces was immediately started by the first occupants of Ifugao land. For lack of arable land, those first people were forced to eke out a living from the mountains by terracing rice paddies on the slopes which rise to an altitude of about 1500 meters above sea level. It is indeed a wonder how the early Ifugaos, with only the simplest and crudest hand tools, were able to build the rice terraces. They were able to cope with the ecological factors, which they had to interrelate with the social and cultural factors. They not only carved out the terraced paddies but also worked a unique irrigation system and way of maintaining them through constant repair, extension and reconstruction.

Tags
Rice
Ifugao
Banaue
Terraces
Cordillera
Phillipines
Dating from 100 BC, the Ifugao Rice Terraces are the oldest and most extensive use of terraces in the world.
Image Credit
Courtesy Wikipedia/Agricmarketing
Image Caption
Using only the simplest tools, the first inhabitants of Ifugao began the construction of 20,000 hectares of the oldest and most extensively used terraces.