Discovery of Camptothecin and Taxol®

The plaque commemorating the discovery reads:

The research team of Monroe E. Wall, Mansukh C. Wani, and colleagues discovered two life-saving anticancer agents from natural products. In 1966, they reported the first of these, Camptothecin, from the Chinese tree Camptotheca acuminata. In 1971, they reported the structure of Taxol from the Pacific yew, Taxus brevifolia. These natural products were isolated by a novel bioactivity-directed fractionation of the crude plant extracts. Both of these compounds kill cancer cells by unique and previously unknown mechanisms of action, and together they have been approved for treatment of ovarian, breast, lung, and colon cancers and Kaposi's sarcoma. 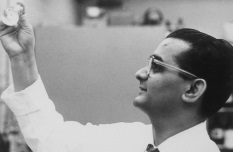