In 1894, Catawba County, North Carolina commissioners asked local landowners to build and maintain an 85-foot-long bridge across Lyles Creek. The community hired Andy L. Ramsour, who served as keeper of the Horseford covered bridge over the Catawba River in Hickory, North Carolina.

Ramsour chose General Herman Haupt's 1839 patented "Improved Lattice Truss" design. The distinction of Haupt's design was his incorporation of vertical supports pinned to each of the diagonal bridge timbers.  The oak bridge was fastened with wooden pins, or trunnels, also made of oak. Although built as an open span structure, it was covered five years later with wooden shingles. The shingles were replaced with tin in 1921.

The Bunker Hill Bridge is one of only two remaining covered bridges in North Carolina and is the world's sole remaining example of a Haupt truss design. 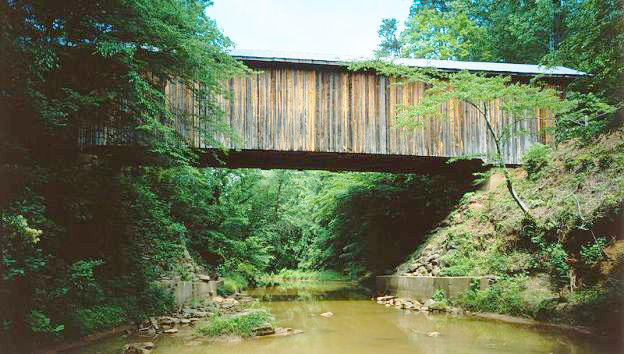