The third bridge built on the same site to carry railroad tracks across the Susquehanna River just north of Harrisburg, Pennsylvania, the Rockville Stone Arch Bridge, at 3,820 feet long and 52 feet wide, is believed to be the longest and widest stone-arch railroad bridge in the world. A central link in rail travel between New York City and Pittsburgh, the Rockville Stone Arch Bridge accommodates four lines of railroad tracks, today serving both the Norfolk Southern and Amtrak lines.

At the time of its construction, the Rockville Stone Arch Bridge represented the high point of the Pennsylvania Railroad's program in the late 19th century to replace all wooden and iron bridges with stone and concrete structures. It also demonstrated the successful evolution of stone-arch bridge-building in America, placing 48 spans of 70 feet each across the flood-prone Susquehanna and eliminating a significant bottleneck on the main Pennsylvania Railroad line. 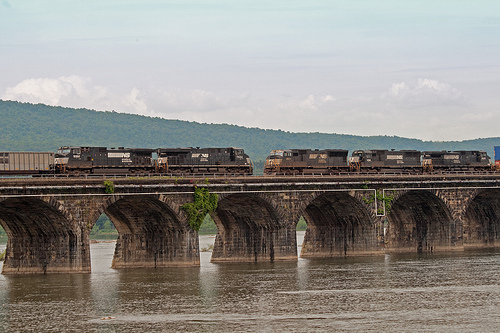