The Starrucca Viaduct of the Erie Railroad Company crosses Starrucca Creek in Lanesboro, Pennsylvania. It is one of the oldest and one of the longest railroad bridges in Pennsylvania. Its 18 slender, semicircular stone arches each span 50 feet and the structure rises 110 feet above the creek.

When built, it was believed to be the most expensive railroad bridge in the world, costing $320,000. Over 800 workers, paid $1 per day, completed the entire bridge in about a year. A half-million feet of cored and hewn timbers were used in the falsework, the temporary wooden framework for supporting the masonry arch rings until the keystones were placed. 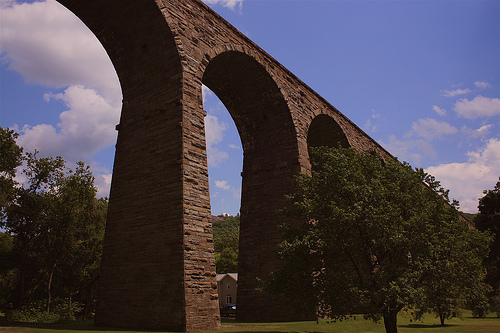