Vandenberg Air Force Base was the nation’s first space and ballistic missile operational and training base. Beginning with its first launch, a Thor Intermediate Range Ballistic Missile (IRBM) on December 16, 1958, it has been the launch site of many of America’s military satellites and polar-orbiting satellites. Its notable launches include Discoverer 1 in 1959, the world’s first polar-orbiting satellite, which resulted in the first recovery of a man-made object from space, and helped the Air Force conceal the launch of the Corona series of photo reconnaissance satellites, the nation’s first spy satellites. The base has played a critical role in America’s defense policy throughout its existence, housing the Atlas, Titan I, Titan II, Minutemen and Peacekeeper ICBM programs. The air base’s historically significant launch complexes are Space Launch Complex-6 (SLC-6) and Space Launch Complex-10 (SLC-10). SLC-6 housed the launch site for the Manned Orbital Laboratory (MOL), an Air Force program designed to prove the utility of using manned, space based resources for intelligence gathering in battle. The Air Force canceled the MOL program in 1969, when it decided that the unmanned spy satellites exceeded the intelligence gathering capabilities of the MOL program. Currently, The Boeing Company uses LSC-6 to launch its Delta IV Launch Vehicle. SLC-10 is one of the last surviving examples of a 1950s era launch complex. Built at the start of the Space Age, SLC-10 contributed significantly to the operational missions of the Air Force’s Thor IRBM training program, America’s military satellite program, and the Air Force’s Program 437, an Air Force anti-satellite weapons system test platform. Between January and March, 1962, the Air Force relocated SLC-10 to Johnson Atoll in the Pacific Ocean to support the Air Force’s nuclear weapons testing program, before rebuilding the site at its original location in 1963. 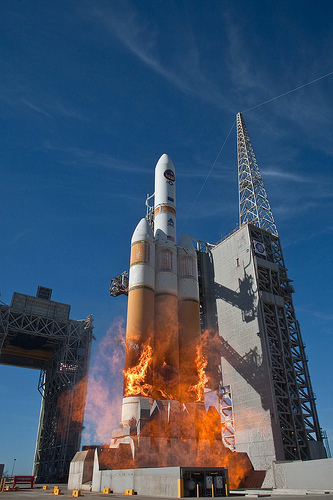