Development of the Pennsylvania Oil Industry

Long before Texas gushers and offshore drilling, and a century before oil wells dotted Arabian sands and rose out of Venezuelan waters, the center of petroleum production was western Pennsylvania. In the middle of the 19thcentury two developments occurred that guaranteed Pennsylvania’s dominance: The construction, in Pittsburgh, of the first still to refine crude oil into kerosene for use in lighting, and the drilling of the first oil well in Titusville, Pennsylvania.

The American Chemical Society designated the development by Samuel Kier of the first still for refining crude oil as a National Historic Chemical Landmark in a ceremony in Pittsburgh, Pennsylvania, on August 26, 2009. The plaque commemorating the event at the Kier still location (now U.S. Steel Tower) reads:

Near this site in the 1850s Samuel Kier constructed a cast-iron distillation unit for refining crude oil. Kier’s one-barrel still produced kerosene, a clean burning lamp fuel. Later, Kier built a five-barrel still and invented a lamp that minimized smoke and odor. Kier’s refining process touched off the search for more dependable sources of crude oil, which led to the drilling of the nation’s first oil well in Titusville, Pennsylvania. These two technologies — refining and drilling — made western Pennsylvania the undisputed center of the early oil industry.

The American Chemical Society designated the drilling by Edwin Drake of the first oil well in a ceremony in Titusville, Pennsylvania, on August 27, 2009. The plaque commemorating the event at the Drake Well Museum reads:

On this site Edwin Drake drilled the world’s first oil well, striking oil on August 27, 1859. Crude oil — which seeps to the surface in this part of Pennsylvania — was often collected and used medicinally to treat rheumatism and sprains. Later, refined oil began to be burned in lanterns. The demand for oil grew, setting off a search for a way to recover the large quantities of oil thought to exist below the surface. Drake, with the assistance of William Smith, known as “Uncle Billy,” found oil at a depth of 69 ½ feet, prompting the first American oil boom. As a result, western Pennsylvania became the undisputed center of the early oil industry. 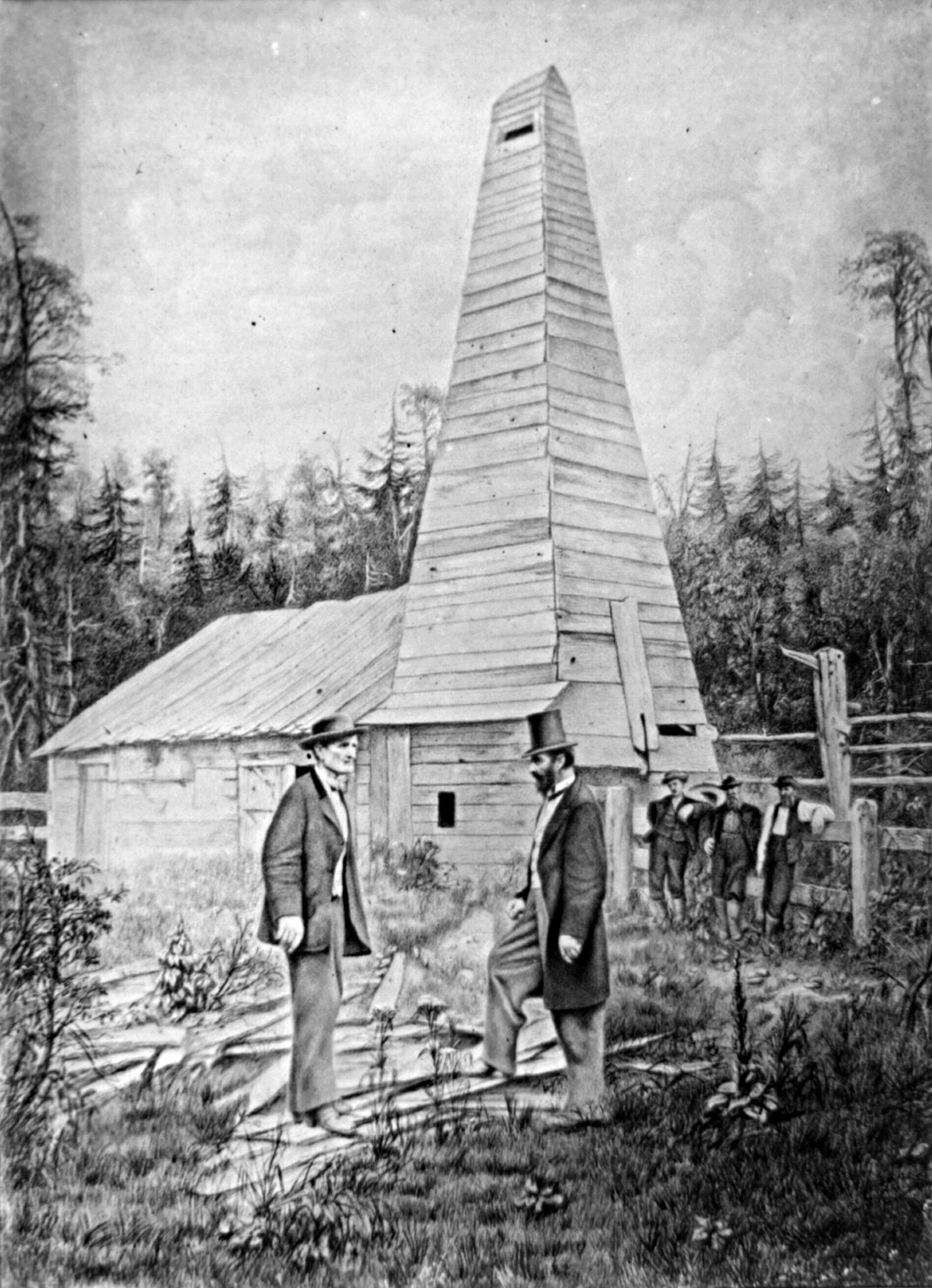 A retouched photograph showing Edwin L. Drake, to the right, and the Drake Well in the background, in Titusville, Pennsylvania, where the first commercial well was drilled in 1859 to find oil
Address:
Drake Well Museum
202 Museum Ln
Titusville, PA, USA