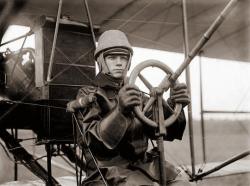 On 27 October Mrs. Ralph Van Deman, wife of Capt. Van Deman, became the first woman in the U.S. to go aloft in an airplane when she flew at College Park as the passenger of Wilbur Wright. Mrs. Van Deman was a good friend of Katherine Wright, the sister of the Orville and Wilbur.

Lt. Frederic Humphreys was the first military pilot to solo in a military airplane. He, Lt. Frank Lahm, and Lt. Benjamin received their flight instruction at College Park from Wilbur Wright.

1909: First U.S. Naval officer to fly in a heavier-than-air machine

The U.S. Army leased some 200 acres, extending north along the Baltimore & Ohio Railroad property to a series of goldfish ponds and east to the Paint Branch of the Anacostia River, with a maximum cleared runway of 2,376 feet in an east-west direction. Four temporary wooden hangars 45 feet square, built on plans furnished by the Wright Company, were erected along the railroad track, with a small headquarters building next to them. One of the hangars was used to quarter a detachment of enlisted men; a tent served as an emergency hospital.

1911: First testing of a bomb aiming device from an airplane

Inert bombs were dropped into the goldfish ponds at the end of the airfield using a bombsight developed by Riley E. Scott. 1912: First testing of a machine gun from an airplane On 7 June, Capt. Chandler fired a Lewis Machine Gun from a Wright B airplane.

The regular U.S. Postal Air Mail flights were inaugurated on 12 August from College Park to Philadelphia to New York.

1927–35: First radio navigation aids developed and tested by the Bureau of Standards

These first radio navigational aids were the forerunners of the modern Instrument Landing System used today.