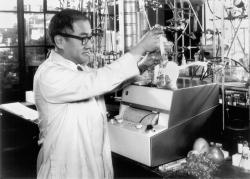 Flavor—encompassing both aroma and taste—provides the defining characteristic of how we experience food. Flavor has long been an enigma to scientists: Aristotle described two categories of taste, sweet and bitter. Today we recognize five basic tastes in food: sweetness, saltiness, sourness, bitterness and umami (savory). But what are the scientific components of flavor, and how can flavor be studied, quantified and replicated?

Since the 1940s, researchers at the Western Regional Research Center (WRRC) have worked to establish the scientific understanding of the chemical essence of flavor. WRRC scientists developed methods for analyzing the trace amounts of organic chemical compounds found in foods that produce taste and aroma. This triggered new capabilities in analytical chemistry that revolutionized the field of flavor chemistry and contributed important advances in analytical  instrumentation. These and other achievements by WRRC scientists resulted in improvements to processed foods and development of state-of-the-art measures to monitor food quality, establishing the WRRC as a leader in the field of flavor science.

Image Credit
Photo by USDA-AR
Image Caption
Roy Teranishi samples the headspace over fresh grapes before injecting a sample into a gas chromatograph.