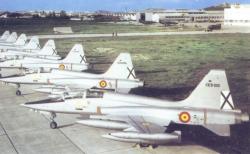 Getafe Airfield was the site of the world’s first successful rotorcraft flight, on January 17, 1923. Lieutenant Alejandro Gómez Spencer piloted a C.4 Autogiro designed and built by Juan de la Cierva, who tested a series of autogiros between 1920 and 1924 at the Getafe site. Cierva’s autogiros introduced important technologies and flight techniques that led to the development of helicopters and other rotary wing aircraft.