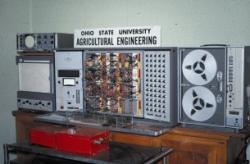 The first laser grade control was developed by agricultural engineers James Fouss and Norman Fausey of USDA's Agricultural Research Service at The Ohio State University in the mid-1960's. That system controlled the precise depth and grade of subsurface drains by regulating trenching and plow-type drainage machines. Photo cells mounted on the drainage machine automatically raised and lowered the digging device, keeping the cells centered on a laser beam set to the desired elevation and grade. The necessary signal processing circuit was designed and fabricated for ARS by Control Systems Co. of Urbana, OH, co-owned by Ted L. Teach.

Concurrently, Robert H. Studebaker, of Tipp City, OH, began to develop a laser controlled motor grader. Studebaker introduced a rotating prism to create a "plane" of laser light that could control several machines on a field. In 1967, Studebaker and Teach formed the LaserPlane Corporation in Dayton, OH. Laser control of a trenching machine was first demonstrated in September, 1968 at the Ohio State Farm Science Review. Prior to laser control, grades were controlled by a skilled machinery operator using a sight bar with a series of targets place at 50 to100 foot intervals. Now, continuous improvements and innovations have led to vastly expanded applications of laser-beam control technology to agricultural, construction, industry, and military tasks, worldwide.