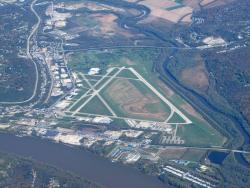 Lunken Field, now also known as Cincinnati Municipal Lunken Airport, opened in 1925 on ground purchased from the Cincinnati Polo Club. The nation’s largest municipal airport at the time, it attracted several aerospace enterprises, starting with early aviator J. Richard “Dixie” Davis, who established his barnstorming enterprise there in 1925.  In 1928, several other firms established enterprises at the field – each making history.

The Lunken family, led by patriarch Eshelby Lunken, for whom the field is named, established the Aeronautical Corporation of America (Aeronca) at the site, and manufactured their C-2 Aeronca ultralight monoplane design. The C-2’s price of $1,495 is credited with helping jump-start the civil aviation industry in America.

Powel Crosley and Julius Fleischmann started the Metal Aircraft Corporation of Cincinnati at the site, which manufactured the G-2-W Flamingo, which achieved world fame when pilot Jimmy Angel crash-landed one in Venezuela, bringing Angel Falls, the world’s highest continuously flowing waterfall, to the world’s attention.

The field still serves the city of Cincinnati as a general aviation airport.