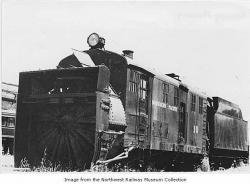 The oldest surviving rotary snowplow in the world

Manufactured by Cooke Locomotive & Machine Works of Paterson in 1887, the Northern Pacific Rotary Snow Plow #2 is the oldest surviving rotary snowplow in the world. Rotary snow plows provided a more effective and reliable means of removing snow from rail lines.

Before its invention, railways were forced to rely on snow sheds and fixed plows which tended to be inefficient and sometimes dangerous. The rotary snow plows were safer because they moved at slow, consistent speeds to remove the snow with a large cutting wheel that would cut the snow and pass it to a throwing wheel behind it. In one hour, a rotary plow could do the same amount of work as a regular plow could in one day.

Though the patent was first issued to Orange Jull in 1884, it was John and Edward Leslie of Orangeville, Ontario who built and perfected Jull's design.