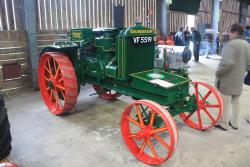 The Rumely Companies, which operated in La Porte, Indiana, from 1853 to 1931, produced a variety of equipment including threshers and steam engines, which helped to change the nature of American and world agriculture. The revolutionary OilPull Tractor, which was introduced in 1910, used a unique carburetion system developed by John Secor, the Company's Chief Engineer. The OilPull tractor efficiently converted a low cost petroleum product to mechanical power, greatly reducing the need for animal and steam power on American farms. Dr. Edward Rumely, grandson of founder Meinrad Rumely, continued the company's emphasis on agricultural mechanization and forecast its dramatic impact on farm productivity and efficiency. Many Rumely engineering accomplishments were carried forward by the Allis-Chalmers Company after it acquired the Rumely Company in 1931.