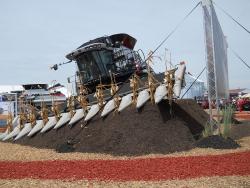 In 1941, near Palouse, Washington, Raymond A. Hanson conceived of a self-leveling mechanism for hillside combines. On the steep hills in the Pacific Northwest, leveling is necessary to save grain because of the gravity grain separation mechanism. Before the Hanson invention, manual leveling required a person to stand on the combine platform and adjust the machine to the lay of the land - a hot, tedious job. The grain-saving attributes of Hanson's invention were probably more important than the labor saving, although both were valuable. The first ten self-leveling mechanisms were built in 1945. A mercury switch controlled a vacuum operated cylinder to level the separation mechanism.

Over the next several years, he built and sold some 2,000 by going farm-to-farm and offering to install them for a trial period and to remove them, if the farmer wasn't satisfied. He never had to take one back! Hanson founded the RAHCO company in 1946 to produce the automatic leveling device. The cylinders, solenoid valves, switches and other parts were produced in Palouse, Washington. Since then RAHCO, of Spokane, Washington has grown into a world leader in the design and production of custom commercial machinery systems. RAHCO estimates that automatic leveling has saved at least three percent of grain harvested on lands where combine leveling is needed, which is worth millions of dollars each year.