Only since 1912 have glass jars and bottles been in cheap and plentiful supply for pharmaceuticals, household products, food and beverages, and an endless variety of uses. The bottle-making machine introduced the safety, standardization, quality, and convenience of glass containers. Not only did they revolutionize the industry, the Owens machines ended child labor in glass-container plants. In 1913, the National Child Labor Committee of New York City said the rapid introduction of the automatic machine did more to eliminate child labor than they had been able to do through legislation.

Before mechanization, glass workers were blowing molten glass into metal molds. Increasing demand for bottles stimulated many attempts at automated bottle machines in Europe and the United States. Michael J. Owens (1859-1923) devised the first commercially successful, fully automatic bottle-making machine in 1903, financed by Edward D. Libbey (1854-1925) and executed with the aid of engineers William Boch, C. William Schwenzfeier, and Richard LaFrance. As a result of nine years of refined design work, the "AR" machine was less limited in the design of molds than the "A" and permitted greater cooling facilities. The general-purpose "AR" had an average production of 50,400 bottles a day. The last two Owens machines in operation, the AQ, were operated at Gas City, Indiana, until December 17, 1982. Owens-Illinois is located in Toledo at the original site of the Libbey Glass Company of 1892. 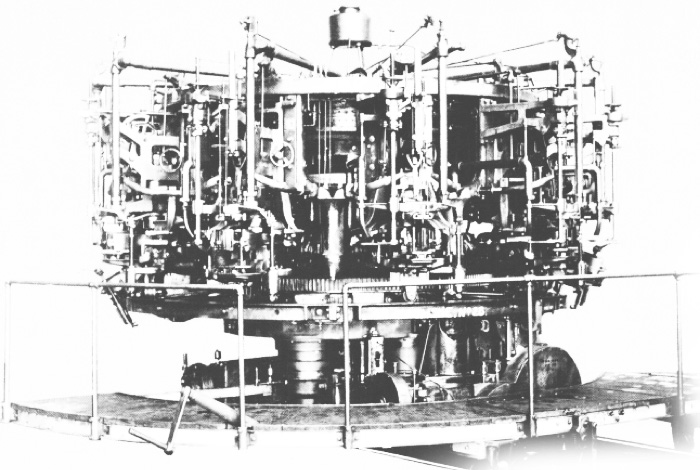