A majority of the buildings, used originally in steam locomotive repair and maintenance, are still intact, including the backshop (erecting shop), roundhouse, flue shop, paint shop, and parts storage buildings. The 37-stall roundhouse is one of the largest remaining roundhouses in North America still in continuous operation. The site contains other significant buildings including the car repair shed, yard office, oil house, sand house, and wheel balancing shed.

There are four known preserved railroad shop complexes in the United States: Spencer Shops, Southern Pacific Sacramento Shops (California State Railroad Museum), Baltimore and Ohio Shops (B&O Railroad Museum) and the Central of Georgia Shops and Terminal in Savannah, GA (Railroad Roundhouse Museum). Spencer is the only preserved shop complex designed and constructed primarily during the 20th century. The backshop at Spencer is the only preserved erecting shop, utilizing the longitudinal design for locomotive overhaul.

The shops were proposed by Samuel Spencer, President of Southern Railway.The railway began construction on 141 acres of land purchased in 1896. Once completed, the Spencer Shops serviced four equal operating lines of 160 miles each at a point halfway between Washington, D.C. and Atlanta, GA.

The facilities were originally constructed to provide regular maintenance and overhaul of steam locomotives, freight and passenger cars, and served as a base for track maintenance-of-way. The roundhouse, originally 15 stalls, was completely remodeled in the 1940’s to accommodate diesel locomotives.

From the National Register of Historic Places Inventory, Nomination Form’s Statement of Significance: "The Spencer Historic District is the most intact area representing the development of the town of Spencer, one of the largest single-industry towns in the Piedmont region of North Carolina. It was established in 1897 to house skilled workers and management at the Southern Railways' newly-constructed shop facilities, one of the largest railroad shops in the country, and experienced its primary development from that date until 1940." 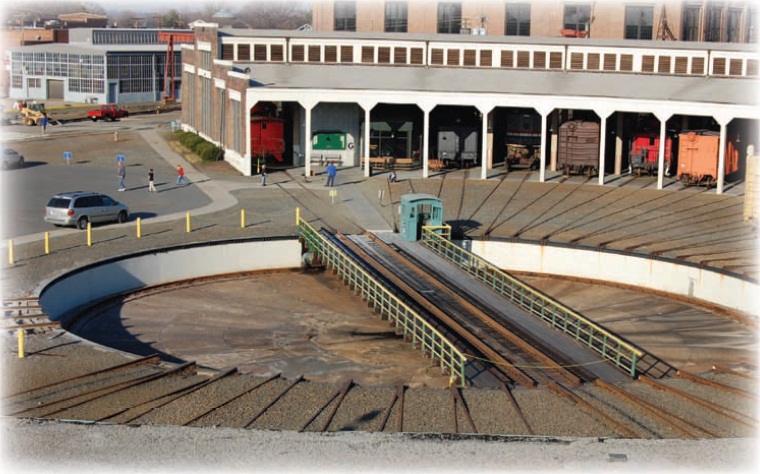