This was a pioneering venture in mainline railroad electrification. It established single-phase alternating current as a technical and economical alternative to direct current. This concept exerted considerable influence over subsequent systems both in the United States and abroad. The major components of the system were developed by the engineering staffs of the New York, New Haven & Hartford Railroad and the Westinghouse Electric and Manufacturing Company of East Pittsburgh, Pennsylvania. The New York, New Haven & Hartford Railroad Company was formed 6 August 1872, by the union of the Hartford & New Haven Railroad with the New York, & New Haven Railroad. The latter controlled by lease the Shore Line Railway from New Haven to New London. Thus the operation between New York, New Haven, Hartford, Springfield and New London was united into one system. In 1887, the New Haven added to its system three north-and-south lines known as the Northampton, the Naugatuck and the Valley. In 1892 and 1893, it added the remaining north-and-south line in Connecticut, the Housatonic, and reached into territory further east by other leases. In 1898, by its lease of the New England system extending from Boston to the Hudson River, with branches, the consolidation of the New York, New Haven & Hartford system was substantially completed-a steam system that reached over 2,000 miles; embracing a network of railroads serving nearly every city and village in southern New England. The AC electrification program of the New Haven was the first major electrification of a steam railroad. The most important electrification up to that time, it permitted the New Haven to be the first major railroad in the United States to use electric locomotives over considerable distances in both local and high-speed service. Until this electrification, nearly all railroad electric power experience had been with direct-current (dc) systems because the performance characteristics of the dc motor generally were considered superior for railroad service. The New Haven, however, decided on ac for its suburban region because, unlike dc, it allowed large-scale generation and long-distance transmission capabilities that were economically more favorable and would permit future expansion. After the initial program demonstrated the feasibility of the new system, it was broadened to include freight and switching operations, as well as passenger service, and was extended to New Haven and to Pennsylvania Station in New York City, and to a number of branch lines. The unique feature of the New Haven Railroad's pioneering program was the extensive application of 11-kilovolt ac, 25-Hertz, single-phase power. 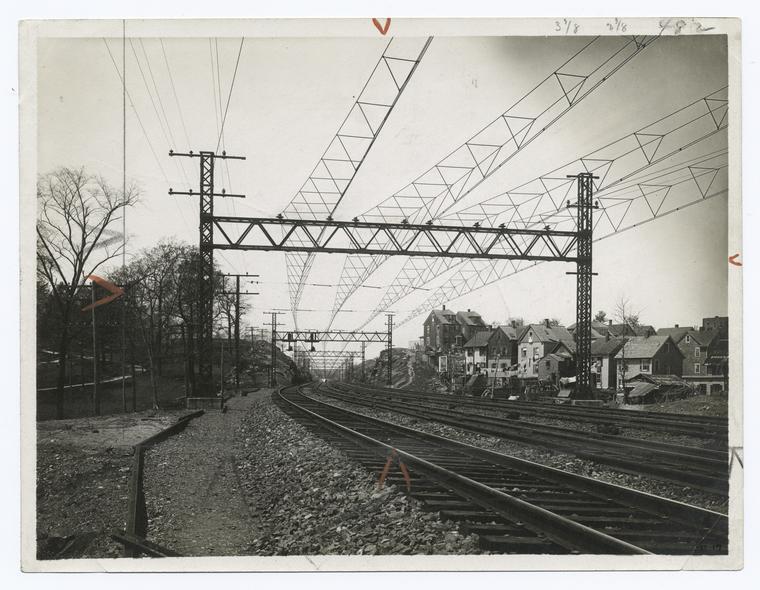