In its infancy, Hangar Nine housed Curtiss JN-4s ("Jennys") like the one Charles Lindbergh landed there when he reported for duty as a flying cadet in 1924.

As the U.S. was preparing to enter World War I, the Army raced to build an entire airfield, complete with 16 wooden hangars, successfully completing it in less than a year. The last remaining World War I facility of its kind, Hangar Nine at Brooks Air Force Base represents the emergence of fast-track construction methods using available materials and the skills of a local workforce.

The hangars were a focal point of the Army's early flight training program and, as such, figured prominently in America's emergence as a global military power.

Of dozens of similar hangars built during the pre-World War I period, only Hangar Nine remains. In 1969, the military and local community completed a six-year restoration effort that returned Hangar Nine to its original condition, as a tribute to the pioneers of military aviation and aviation facility design. Today it houses the Museum of Aerospace Medicine.

The wooden hangar designs were based on standardized plans by Albert Kahn, the most influential industrial architect of the era. Between 1900 and 1940, Kahn designed over 2,000 factories for the auto and aviation industries. 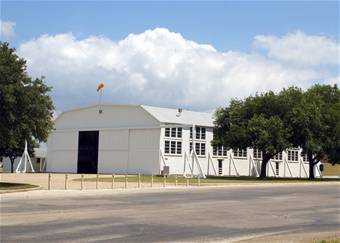