The Fresno scraper established the basis for the modern earthmoving scraper, being able to scrape and move a load of soil, then discharge it at a controlled depth. It quadrupled the productivity of manual labor, replacing hand shoveling of earth into horse carts.

James Porteous, a Scottish immigrant millwright-entrepreneur, founded the Fresno Agricultural Works. The Fresno scraper evolved from his patents and those he acquired from William Diedrick, Frank Dusy, and Abijah McCall. The blade that Porteous designed scooped dirt up, instead of pushing it along. The blade ran along the bottom of a C-shaped bowl, which was adjustable to alter the angle of the bucket to the soil so that dirt could be dumped into low spots. Most bulldozer blades, as well as giant carry-all earth-movers, descend from the Fresno.

Between 1884 and the advent of tractor-drawn scrapers in the 1910s, thousands of "Fresnos" were used in agriculture for canals, ditches, and land leveling; in road and railroad grading; and in general construction not only in California, but throughout the United States, and in many foreign countries, and on the Panama Canal. It dominated the field for 50 years, riding first on runners, then wheels. Horses generally were replaced in the 1920s by gas and diesel power.

The Fresno Scraper was rededicated as an ASME Mechanical Engineering Landmark in March, 2011. 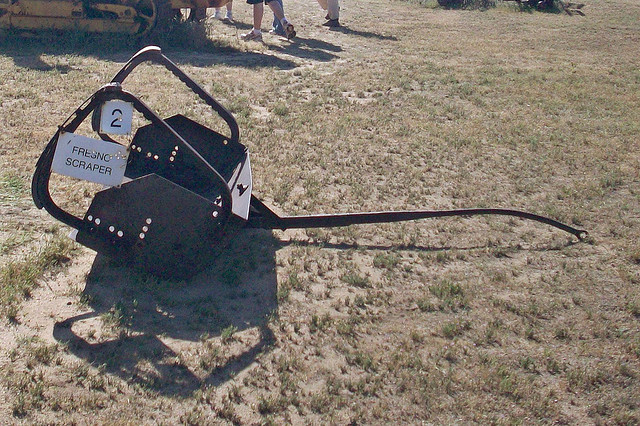