Wind dynamics were a major consideration in building such a huge structure. When winds blow against the building, they are deflected up over the roof, creating a partial vacuum that can draw the roof up with a force several times greater than the direct force of the wind. Wind tunnel testing on a model helped designers decide that a semi-parabolic shape would best resolve air current concerns.

The Goodyear Airdock was designed by the Goodyear-Zeppelin Corporation as the construction site for the huge U.S. Navy airships, the USS Akron and USS Macon. Each airship (also called a dirigible or a blimp) was 785 feet long. However, the building was designed to house an airship considerably larger than the two contracted for by the Navy. The company designed the airdock to accommodate an airship of 10,000,000 cubic feet capacity. The building was completed in less than a year for a cost of $2.25 million. The Goodyear Airdock remains among the largest buildings ever designed, in terms of obstruction-free interior square footage. It covers an area larger than eight football fields set side-by-side and is roughly as tall as a 22-story building.

The airdock has double doors at each end of the building. Each weighs 600 tons and rests on 40 wheels, set radially on curved, standard gauge railroad tracks.  Each set of doors has an individual power plant that can open and close the doors in about five minutes. 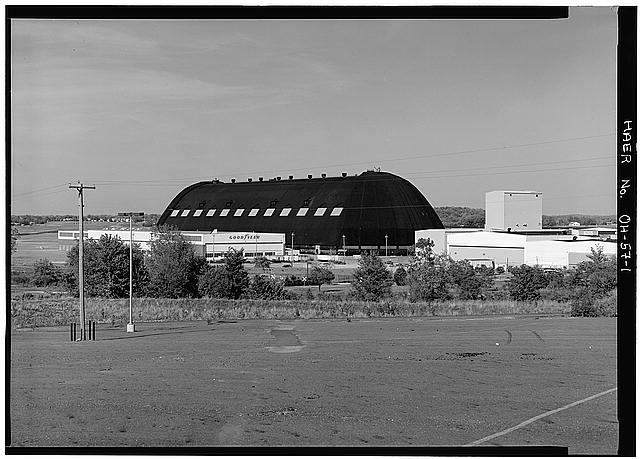