Developed by the Hohokam, a prehistoric group of Native Americans, the canal system in the Salt River Valley serviced more than 100,000 acres of mostly arid desert country in what is now southern Arizona. The prehistoric Hohokam constructed one of the largest and most sophisticated irrigation networks ever created using pre-industrial technology.

The Hohokam canal system is considered to be the largest pre-historic irrigation system in the New World and the oldest irrigation system in the United States. Over 700 miles of major canals were constructed by hand over many centuries without the benefit of modern survey instruments, machinery, or wheeled vehicles. Their major canals averaged about 8 to 12 miles and were largest at the headwaters and tapered throughout their length so that the velocity was maintained between approximately 1.5 and 3 ft per second throughout the system. They were also able to adjust their construction based on the terrain. The Hohokam developed four different types of distribution systems to use depending on the terrain. In addition their system was a dynamic irrigation system. When conditions changed, such as a canal filling with silt, they would abandon it and build a new one adjacent to the old one. 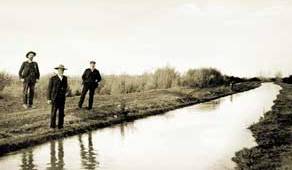