The Northern Pacific High Line Bridge No. 64, built between 1907 and 1908, has continued to perform yeoman service in the uninterrupted flow of the Nation's commerce. Nearly, 100 years after this bridge officially opened, it still carries 125-ton car unit coal trains, double stack container trains, lumber, and refined products at train speeds of 50 m.p.h.

The High Line Bridge was built to overcome the need to use helper engines to overcome grades exceeding 1 percent that occurred between Alta (Peak) and Berea. These helper engines added expenditures and incurred delays in train operation. To construct this viaduct the project engineer estimated that 1,250,000 cubic yards of earth would have to be moved. Despite experiencing at least one tornado, having to deal with quicksand and clay in the riverbed, and a scarcity of good gravel for making concrete, the bridge was finally ready for its official opening on May 12, 1908. 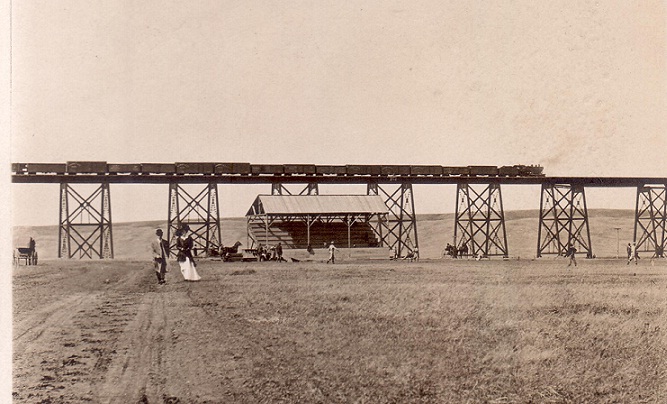