Philadelphia City Hall was the largest masonry load-bearing wall building in the world at the time of its completion in 1901, stood as the tallest occupied building in the United States until 1909, and still is the largest city hall in the United States. The building covers 14.26 acres, originally contained 634 rooms with over 1 million square feet of space, and with its tower and statue of William Penn rises a total of 548 feet above the ground. The construction of Philadelphia City Hall began in 1872 and was completed in 1901. The bill providing for the erection of a new city hall passed both branches of the Pennsylvania State legislature in early April 1860, and the voters of Philadelphia selected Penn Square as the site of City Hall on October 11, 1870. The building was designed in the Second-Empire Mode of French Renaissance Revival architectural style by architect John McArthur, Jr. with the assistance of Thomas U. Walter, John Ord, and W. Bleddyn Powell.

The walls are brick, faced with white marble, and rise to a height of 337 feet above the ground. Not including the statue of William Penn, the tower rose 173 feet above the top of the building's masonry construction. The building measures 486 feet by 470 feet and rises seven stories high. The 18-foot 3-inch high basement story was constructed of white granite blocks that weigh from two to five tons and form walls up to 22-feet thick. The foundations of the tower rest on a bed of concrete 100 feet square and 8 feet 6 inches thick. The Tacony Iron and Metal Company hired civil engineer C.R. (Carl Robert) Grimm, M. ASCE to design the upper wrought-iron frame, metal-clad portion of the tower, which surmounted the masonry tower and supported the 37-foot-tall, 27-ton bronze statue of William Penn. The tower was designed to carry its dead load along with live loads on three floors and the balcony of 100 lb/ft2 and horizontal wind loads of 50 lb/ft2. The octagonal-prism tower designed by C.R. Grimm consisted of wrought-iron framework that supported the cast iron outer plates, which were electo-plated with copper and then covered with a finish coat of aluminum. The tower's pins and anchor bolts were steel. 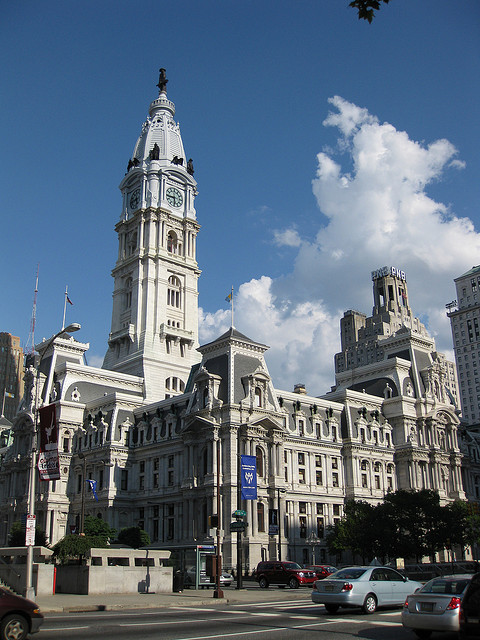