This was the first successful machine for mechanizing the identification and price marking of retail merchandise. At a single stroke of the operating handle, the machine formed a tag from a roll of stock, imprinted it with price and other information, formed a wire staple, and stapled the tag to the merchandise. This means for dispensing with handmade and written tags amounted to a minor revolution in the then rapidly expanding retail industry.

This machine was developed by Frederick Kohnle of Dayton, and early examples were produced by the Automatic Pin Ticketing Machine Co., a predecessor of the Monarch Marking System Co. In 1890 Kohnle invented a paper price tag with fastening device and was granted US patent #457,783 in 1891. While Kohnle founded a company to manufacture these machines, he continued developing improvements and had begun working on a table-top, hand-operated machine. On November 18, 1903, the Automatic Pin Ticketing Machine Co. purchased the patents of Wm. G. Metcalf, another Dayton inventor (patents #607,119 and #619,773, in 1898 and 1899 respectively). Kohnle completed a engineering model in 1902 and tested in at a local department store. He soon developed a floor-mounted, foot-treadle version for which he received a patent (#762,322) on June 14, 1904. By mid-March of 1904, nearly 150 units had been completed.

The landmark artifact is the earliest known model, believed to be either the device or a companion model to the table-top test device of 1902. 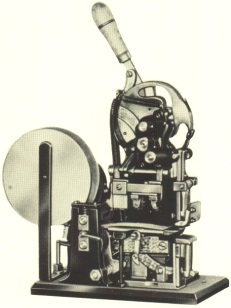