Three rivers - the Allegheny, Monongahela, and Ohio - join in Pittsburgh, making the city a natural site for the building of bridges. But the Smithfield Street Bridge stands apart from other Pittsburgh bridges for several reasons: it replaced structures by two well-known bridge engineers, Lewis Wernwag and John A. Roebling; it was the first use in America of the lenticular - or lens-shaped - truss design; and it was one of the first major bridges in the U.S. built primarily with steel.

The Smithfield Street Bridge also is significant because it was designed by the renowned engineer and bridge designer Gustav Lindenthal, who was only 32 years old when he conceived it. The graceful appearance of the bridge's twin 360-foot spans foreshadowed a new approach to bridge-building-when Lindenthal became commissioner of bridges for the city of New York in 1902, he initiated the formal practice of engineers and architects collaborating on all major bridge projects. 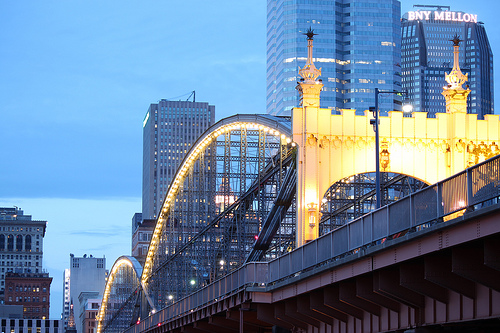