The SS Jeremiah O'Brien, an emergency cargo vessel of the type EC2-S-C1 better known as Liberty Ships, is one of two operative survivors of 2,751 ships, the largest fleet of single class ever built. The other is the SS John W. Brown, now in Baltimore (not operative at the time of the landmark designation). Between March 1941 and November 1945, eighteen US shipyards produced 2,751 ships. The design stressed minimum cost, rapidity of construction, and simplicity of operation. The original design and configuration have not been altered. Dire necessity to move supplies across the Atlantic faster than Nazi U-boats could sink them led the U.S. Navy to adopt plans for the mass production of tramp steamers (from Joseph L. Thompson & Sons of Sunderland, England). A San Francisco radio announcer who served on one at Normandy called them the shopping baskets of World War II. The O'Brien was built in fifty-six days at South Portland, Maine, by the New England Shipbuilding Corporation. A triple-expansion engine of 2,500 horsepower drove the 441-foot vessel, carrying 9,000 tons of cargo at 11 knots. Water-tube oil-fired boilers replaced coal-burning Scotch boilers of the original design. The ship carried ammunition, grain, and other dry cargo from the United States to Great Britain and ports in South America, Australia, India, and the Philippines. 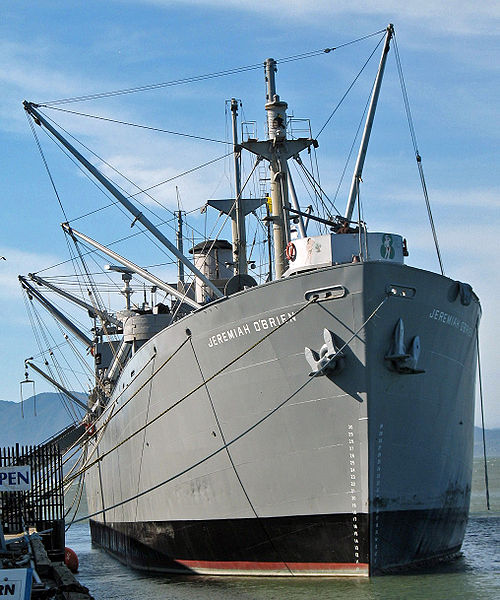