The widespread popularity in the 1850s and 1860s of the Fink through truss bridge, constructed from a design patented in 1854 by architect and civil engineer Albert Fink, represents a critical period in the evolution of civil engineering in America. With railroads expanding dramatically, a replacement for wooden bridges was needed that could be built quickly, cheaply, and with a reasonable assurance that it would survive for an extended length of time.

Fink's design combines elementary principles of bridge design with a practical application of available materials - cast and wrought iron - for the most efficient solution to building long-span bridges quickly and economically. By the mid-1870s, Fink's through truss bridges were eclipsed as bridge building grew more sophisticated, and steel emerged as a material better suited to bridge construction. The last of the Fink-designed bridges remaining in use was the 100-foot-long span at Hamden, New Jersey, which survived until 1978, when it was damaged in a vehicle collision. It has since been dismantled and stored for future restoration. 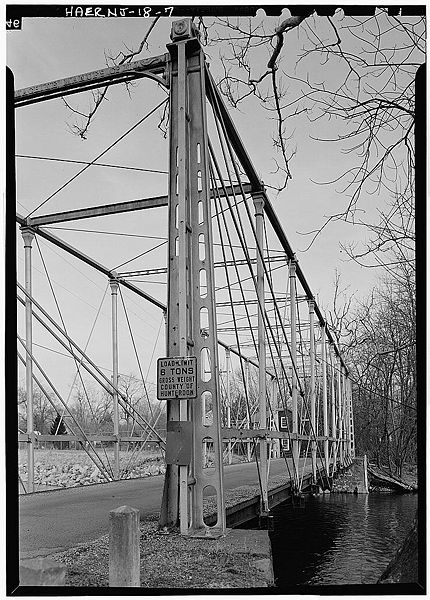 Courtesy Library of Congress
This bridge is an example of the Fink truss, the most efficient solution to building long-span bridges quickly and economically during its time.
Address:
Hamden, NJ, USA