Two factors contributed to why the bridge received this designation: (1) the civil engineers who worked on the project; and (2) the innovative techniques used during construction.

Dr. Maxwell Upson, who was the Chairman of the Board of Raymond Concrete Pile Company, one of the largest contracting companies for foundations in the United States, was an innovator in the field of prestressed concrete, particularly in pile fabrication and installation. He saw prestressed concrete as a way to break down the barriers that once limited how piles could be installed. Before Dr. Upson's research, most concrete piles were square with dimensions of 24 inches or less. He saw potential for using piles with dimensions of 36 to 54 inches. Using smaller pile segments and prestressing technology, he revolutionized the way piles were manufactured.

Some of the other engineers working with Dr. Upson were Henry LeMieux, District Manager for the Raymond Concrete Pile company, who was instrumental in promoting the use of the 54 inch prestressed concrete piles; Walter Blessey (ASCE President, 1979) of Tulane University who was responsible for research and testing of the prestressed concrete elements and who help advance the technology; and Wayne Palmer of Palmer & Baker, Inc. which was the engineering firm responsible for the design of the bridge.

Up until Upson's development of the 54 inch hollow cylindrical prestressed concrete piles, the standard practice was to use solid square or circular concrete piles with dimensions equal to, or less than, 24 inches. Upson also developed a new method to manufacture these concrete piles so that they would achieve a higher concrete strength - nearly 10,000 psi. This procedure was called cenviro which used centrifugal force to generate a drier more compact concrete.

Louisiana soil, which is made up of soft clays and silts, does not develop large tip bearing capacities and require that piles be driven deep until sufficient resistance is developed to support the load. Therefore, these large, prestressed hollow piles were ideal for developing the foundation for a bridge since they could withstand the hammer blows needed to drive the piles deeper into this type of soil.

Once they decided that these larger hollow cylindrical prestressed concrete piles could be used for their bridge foundation, the civil engineers needed to develop a design and method of construction. Given that the contract required construction of the 24-mile span in only 23 months, the engineers devised a rather simple structure - two piles straddled by a bent cap supporting the ends of two 56 foot decks. This simple layout is repeated over and over. By making the components (piles, bent caps, and decks) identical, Upson, Blessey and the engineers at Palmer and Baker could employ the theories of mass production to build this bridge. A concrete casting plant was built at the northern end of the bridge; the components were prefabricated and then barged out via the Lake to the construction site. This assembly-line process significantly reduced both the construction cost and the installation time. The record shows that the bridge was constructed in fourteen months from the time the first piles were driven on May 23, 1955. The original (now Southbound) span opened to traffic on August 30, 1956. 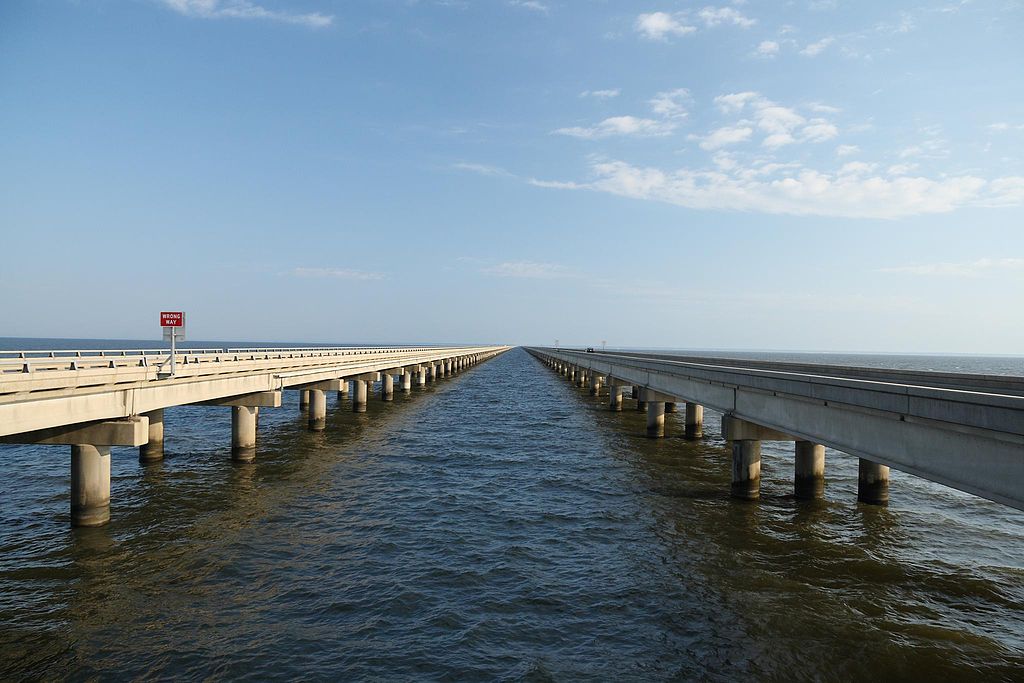