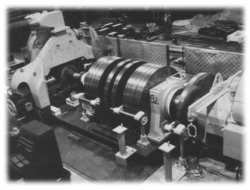 This inertia dynamometer is used to test railroad wheels under controlled conditions that can greatly exceed normal service. It is the first and only railroad dynamometer to test track wheels using vertical and lateral loads, as well as thermal braking loads, at the wheel rim. It can also test railway car and locomotive axles.

Rail wheel dynamometers originally were developed to study crack failures of railroad wheels. A drop test preceded the use of dynamometers. Heavy grade-braking, faster speeds, and increasingly heavy loads on wheels required a means for full-sized wheels and brake shoes to be tested. The first known full-scale wheel and braking dynamometer was built in 1891 by Southern Pacific Railroad to cull out defective wheels. A full-scale brake-shoe testing machine was created in 1893 by the Master Car Builders' Association with assistance from the Pennsylvania Railroad. Several other dynamometers were built in the early twentieth century, as rail technology developed, including the use of steel, mechanical air conditioning, and diesel-electric locomotives.

The dynamometer at AAR was designed and built by Adamson United, Akron, Ohio, in 1955 to specifications of the US Steel Corporation, Monroeville, Pennsylvania. It was conceived by Joseph M. Wandrisco (US Steel) and R. C. Seanor (Adamson United Company). It is driven by a 200 hp motor at speeds up to 1500 rpm, simulating rail speeds of 130 mph. In 1983 it was moved to the Association of American Railroads and modernized by installing computer controls in 1987.