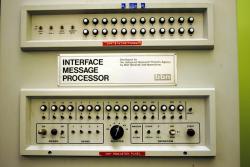 Society
IEEE
Main Category
Electrical
Sub Category
Communications
Era
1960-1969
Date Created
1969
Location Country
us
Coordinates
37.414439, -122.077268
Address1
Computer History Museum
Address2
1401 North Shoreline Boulevard
City
Mountain View
State
CA
Country
USA
Zip
94043
Website
http://www.ieeeghn.org/wiki/index.php/Milestones:Birthplace_of_the_Internet,_19…
Creator
Kleinrock, Leonard
"At 10:30 p.m., 29 October 1969, the first ARPANET message was sent from this UCLA site to the Stanford Research Institute. Based on packet switching and dynamic resource allocation, the sharing of information digitally from this first node of ARPANET launched the Internet revolution." (The plaque can be seen at the UCLA Henry Samueli School of Engineering and Applied Sciences, 405 Hilgard Ave., Los Angeles, California, U.S.A.) The deployment of the ARPANET set in motion a train of developments that led to the Internet as we know it today. The ARPANET was the first global packet-switching based network, and allowed remote network access to varied applications from multiple users among different computer platforms. It also applied the concept of protocol layering to communications. This development was the key to allowing a diverse set of users to operate over the telephone network of the time, which was optimized for voice and not suited to data traffic. With the introduction of a highly-adaptive and robust technology for network access, the ARPANET formed the foundation of today's Internet. The application of packet switching and demand access are fundamental differences between the Internet and previous circuit switching based networks. It uses network resources by dynamically sharing them among many streams. This leads to significantly improved efficiency and robustness of the network. The layering scheme it introduces has allowed the development of flexible protocols, as well as the efficient communication between different computing platforms. ARPANET differed from previous computer networks (e.g. SAGE) in that those networks were specialized constructions, designed to link specific machines of a similar type, whereas ARPANET was designed to allow machines to communicate efficiently irrespective of type. UCLA was selected as the site of the very first IMP (Interface Message Processor). The major reason for this choice was due to the fundamental work and involvement of UCLA's Professor Kleinrock with many early developments of the ARPANET/Internet. His work in extending and applying queuing theory to data network design and his development of the nwtwork measurement technology were keys in the decision to make UCLA the first Internet node, and to serve as the Network Measurement Center. Many further research contributions crucial to the Internet's development and growth were generated by the UCLA team. The reigning switching technology of the 1960s was circuit switching, which was suited to the long holding times of voice traffic. Voice traffic was so dominant, and computer-generated and related traffic was so sparse, that it was difficult to see the merit of packet switching. When packet switching technology was first suggested, the large networking companies considered the technology to be unworkable and unimportant. It was necessary to overcome their dismissal of packet switching and develop it without their support.
Tags
Internet
ARPANET
UCLA
IMP
SAGE
Interface
Message
Processor
Kleinrock
Computer History Museum
Router
University of California, Los Angeles, California, U.S.A., Dedicated 29 October 2009, IEEE Coastal Los Angeles Section
Image Credit
Courtesy Flickr/FastLizard4 (CC BY-SA 2.0)
Image Caption
The original Interface Message Processor, a primitive router, and considered widely to be the beginning (or "birth") of the internet