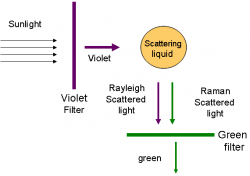 "I propose this evening to speak to you on a new kind of radiation or light emission from atoms and molecules." With these prophetic words, Professor C. V. Raman of Calcutta University began his lecture to the South Indian Science Association in Bangalore on March 16, 1928. Raman proceeded to describe a discovery that resulted from a deceptively simple experiment. Conducted far from the great centers of scientific research in the Western world, the results would capture the attention of scientists around the world and bring many accolades, including the Nobel Prize, to their discoverer.

At this institute, Sir C. V. Raman discovered in 1928 that when a beam of coloured light entered a liquid, a fraction of the light scattered by that liquid was of a different color. Raman showed that the nature of this scattered light was dependent on the type of sample present. Other scientists quickly understood the significance of this phenomenon as an analytical and research tool and called it the Raman Effect. This method became even more valuable with the advent of modern computers and lasers. Its current uses range from the non-destructive identification of minerals to the early detection of life-threatening diseases. For his discovery Raman was awarded the Nobel Prize in physics in 1930.