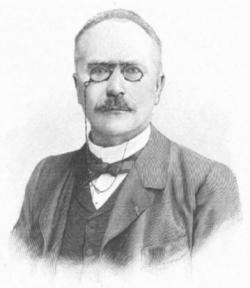 Society
IEEE
Main Category
Electric
Era
1890-1899
Date Created
1890
Location Country
us
Coordinates
48.848168, 2.329527
Address1
Institut Catholique de Paris
Address2
21 rue d'Assas
City
Paris
Country
France
Zip
75006
Website
http://www.ieeeghn.org/wiki/index.php/Milestones:Discovery_of_Radioconduction_b…
Creator
Branly, Edouard
The discovery of the radioconduction is a phenomenon which revolutionized the means of communication. It is at the origin of the development of the TSF (Télégraphie Sans Fil, or wireless telegraphy). As a member of the French Academy of Sciences (it gains vis-a-vis Marie Curie), Branly received international recognition. No more than about fifteen years separate the first wireless transmission across a few meters (1890) from the first transatlantic communication (Marconi, December 1901). Radioconduction (Branly’s effect) is still the subject of research, it was partially interpreted by Bernard Castaing (member of the Academy of Science of Paris) in 2006. The “filings tube” (or coherer) was the first widely used detector for radio communication. The operation of the coherer is based upon the large resistance offered to the passage of electric current by loose metal filings, which decreases under the influence of radio frequency. The coherer became the basis for radio reception, and remained in widespread use for about ten years. It was used by, amongst others, Guglielmo Marconi, in his early experiments. Oliver Lodge adds a "trembler" which periodically dislodged clumped filings, thus restoring the device's sensitivity. The “coheror” was used not only during the first phase of development of the wireless telegraphy, but it was also used by Christian Hülsmeyer as a receiver of his Telemobiloskop, the first radar (1904). The discovery of electromagnetic waves had been made by Heinrich Hertz in 1888, but the “detector” he used (a simple loop) was very ineffective, while a “coheror” was able to detect even a faint signal. Furthermore the “coheror” was able to be directly linked to a Morse’s system, and though it was able to be used in a wireless communication. Edouard Branly is one of the pioneer of wireless transmission along with Heinrich Hertz, Oliver Lodge and Guglielmo Marconi. Heinrich Rudolf Hertz (1857-1894), a professor of physics at Karlsruhe Polytechnic, was the first to broadcast and receive radio waves in the laboratory. Between 1885 and 1889, he used spark discharges to produce electromagnetic waves. His receiver was a loop of wire with a small gap across which a small spark could be observed when the radiator discharged. Hertz died suddenly when he was thirty six, perhaps never realizing that transmission and reception over long distances was possible. Edouard Eugène Désiré Branly (1844-1940) is at the origin of wireless telegraphy. He discovered radioconduction, now called the Branly Effect. On 24 November 1890, he observed that an electromagnetic wave changes the ability of metal filings to conduct electricity. Branly used his discovery to make a very sensitive detector called a coherer, improved versions of which became the first practical wireless signal receivers. Branly, a professor of Physics at the Catholic University of Paris, discovered that when exposed to even a distant spark transmission field, loose zinc and silver filings would “cohere” and provide a path of increased conductivity that could be used to detect the presence of the transmission. The "coherer" took radio transmission out of the laboratory and made communication over long distances possible.
Tags
Radio
Electromagnetic
Coheror
Radioconduction
Image Credit
Courtesy Wikipedia
Image Caption
Edouard Branly