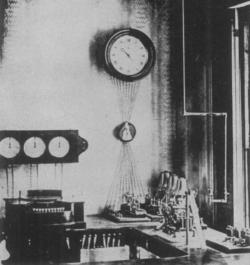 On 28 April 1852 the first municipal electric fire alarm system using call boxes with automatic signaling to indicate the location of a fire was placed into operation in Boston. Invented by William Channing and Moses Farmer, this system was highly successful in reducing property loss and deaths due to fire and was subsequently adopted throughout the United States and in Canada.

The first fire alarm telegraph system in the world was invented, constructed and placed in operation in Boston, Massachusetts, on April 28, 1852. The first alarm was received over the system on April 29, 1852 at 8:25 p.m.

The original system was invented by Dr. William F. Channing, who was assisted in its development and construction by Moses G. Farmer, one of the foremost electrical engineers of the day and who later became the first superintendent of fire alarm telegraph. The system then consisted of three box circuits, three bell circuits, forty boxes, sixteen alarm bells, and crude central office apparatus housed in a building which was exposed to serious fire hazards.

The present office is housed in a beautiful building which was opened in 1925 and located in the Fenway, a part of Boston's park system, 250 feet away from the nearest building and nothing will ever be built nearer. The building is of fire-resistant construction and of sufficient size to take care of the city's natural growth. A special Act of the Legislature was passed giving the city the right to use a section of the park system for this purpose.

The world's first fire alarm telegraph system is still the heart of the Boston fire alarm office. Since the opening of the present fire alarm office in 1925, the only changes to the system came in 1988, with the addition of electronic decoding terminals. The Boston Fire Department has approximately 1500 fire alarm boxes in service on the streets throughout the city and over 1000 master boxes in public and private buildings. The system operates independent of telephone and electric utility lines and has an uninterruptible power supply.