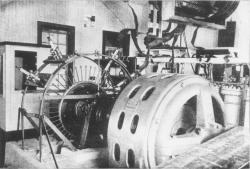 On 24 December 1906, the first radio broadcast for entertainment and music was transmitted from Brant Rock, Massachusetts to the general public. This pioneering broadcast was achieved after years of development work by Reginald Aubrey Fessenden (1866-1932) who built a complete system of wireless transmission and reception using amplitude modulation (AM) of continuous electromagnetic waves. This technology was a revolutionary departure from transmission of dots and dashes widespread at the time.

Three days before Christmas Eve, Reginald Fessenden planned to give two radio broadcasts, on Christmas Eve and New Year’s Eve. Station staff notifies the ships of the US Navy and of the United Fruit Company to listen. These ships had previously been fitted with radio receivers.

The historical site is located at Blackman’s Point, Brant Rock, in the County of Plymouth Massachusetts. Blackman’s Point is a few miles from the center of Marshfield. The Town of Marshfield is approximately 30 miles south-east of Boston. The remaining concrete foundation built to support Fessenden’s wireless tower, is in a trailer park owned by the Blackman family at the south end of the town of Brant Rock, off of Central St.