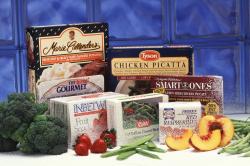 Frozen foods have become a staple of the modern diet. Freezing allows consumers to have access to foods previously unavailable or available only seasonally, and it provides convenience for many families. But frozen foods became commonplace only after World War II, in part due to research conducted at the Western Regional Research Center which helped determine the proper time and temperature at which various foods should be frozen to insure their quality and stability.

The plaque commemorating the research reads:

After World War II, the staff of the Western Regional Research Center conducted complex and comprehensive investigations of frozen foods, focusing on how time and temperature affected their stability and quality. The discovery of the chemical changes occurring as frozen food went from the farm to the dinner table provided much of the scientific basis needed for the future success of the fledgling frozen food industry. The freezing protocols, analytical techniques, and food handling and storage recommendations from the Western Regional Research Center studies led to the superior flavor, texture, and appearance of today’s frozen food.