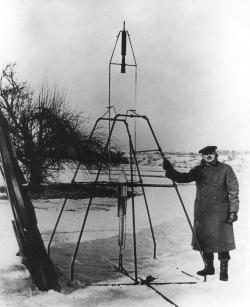 On March 16, 1926 Dr. Robert H. Goddard, also known as "the father of modern rocketry," launched the world’s first liquid propellant rocket from a point 1000 feet S.S.E. of the plaque on the property of the Asa M. Ward Family.  Erected by the American Rocket Society July 13, 1960 in recognition of this significant achievement in the evolution of astronautics.

In the course of Goddard's experiments in Massachusetts (and later in Roswell, New Mexico), he worked to develop many aspects of rocket technology, earning more than 200 patents. By himself he developed the same components and designs that hundreds of German scientists and engineers arrived at independently at great expense at Peenemunde during World War II.