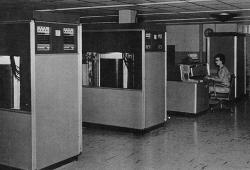 The IBM 350 disk drive storage development led to the breakthrough of on-line computer systems by providing the first storage device with random access to large volumes of data. Since its introduction on September 4, 1956, it has become the primary computer bulk-storage medium, displacing punched cards and magnetic tapes and making possible the use of the computer in such areas as airline reservations, automated banking, medical diagnosis, and space flights.

Fifty disks stacked on a cantilevered, rotating spindle recorded in one hundred concentric tracks on each side of each disk, providing 5 million characters of data storage. Developments, such as the pressurized-air head bearing, made disk storage feasible. Access to any of the 20,000 tracks could be obtained mechanically through an access arm under servo control that would move two read/write heads to the desired disk.

Development of the disk drive was pioneered by IBM engineers in San Jose and led to IBM's first computer manufacturing plant in California.