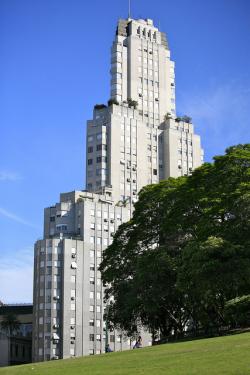 Built during the 1930s, when Argentina's economy was the tenth strongest in the world, the Kavanagh Building was one of the world's first reinforced concrete skyscrapers and for many years remained the tallest building in South America. Commissioned by Corina Kavanagh and designed by architect Sanchez Lago y De la Torre, the 31-story modernist structure juxtaposes five volumes in a triangular, stair-like configuration that served for many years as a representative symbol of modern Buenos Aires.

Fully equipped with central air conditioning, 12 Otis elevators, and state-of-the-art plumbing, the structure was carefully designed to be as slender as possible to avoid unnecessary weight. The Kavanagh building is located in historic Plaza San Martin, also the site of the British-designed Retiro Train Station, the French-inspired Circulo Militar, the Malvina War Memorial, the Palacio San Martin (currently home to the Ministry of Foreign Affairs), and the Plaza Hotel, one of the oldest and most traditional in the city.