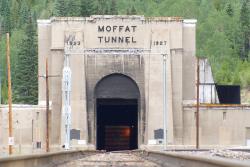 Known as "the highest and lowest holing in history," the tunnel bored through the Rockies at an elevation of 9,200 feet, 2,800 feet below the surface. Eight hundred men worked around the clock for 3 1/2 years, moving 3 billion pounds of rock.

Three thousand feet under the Continental Divide, the Moffat Tunnel united the eastern and western slopes of the Rocky Mountains. The 6.2-mile rail tunnel, the longest in the Western Hemisphere at the time, opened a new transportation artery through the Rockies and shaved 173 miles off the trip from Denver to Salt Lake City. The tunnel's pioneer bore doubled as an aqueduct that carried water across the divide to Denver, increasing the city's water supply by 30 percent.

In addition to introducing combination rail/water tunnels to the U.S., the five-year construction effort led to key innovations in equipment and engineering, such as the Lewis traveling cantilever girder, which was able to support roof and walls under unstable rock, protecting lives and speeding progress.

Alignment surveys were performed at night to avoid aberration due to different air densities and temperatures at the survey points. When holed through, the tunnel's lateral alignment varied only 1 1/4 inches - quite a surveying feat.

Tags
Moffat
Tunnel
Railroad
Continental Divide
Pilot Bore
Rockies
Rocky
Aqueduct
Cantilever Girder
Cantilever Girder
The 6.2 mile Moffat Tunnel in the Rocky Mountains was not only the largest railroad tunnel in the Western Hemisphere when completed, but it also demonstrated new tunnel construction techniques and the innovative concept of using its pilot bore later as a permanent aqueduct.