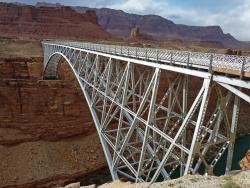 The Navajo Bridge (also known as the Grand Canyon Bridge) was built in 1929 by the Arizona Highway Department and provided a vital transportation link over the Grand Canyon between northern Arizona and southern Utah. Construction commenced by building on one side of the canyon, then on the other, until the two sides met in the middle.

During construction, a ferry was essential for transporting men, tools, construction materials and heavy building equipment. However, on June 7, 1928, high waters, a weakened ferryboat, and worn cables resulted in disaster.  The ferry capsized with three men and a Model T Ford on board.  Coconino County refused to replace the ferry, causing extensive construction delays. For the next seven months, construction equipment and materials were brought in by truck, requiring an 800-mile journey around the canyon.

Tags
Navajo
Bridge
Marble Canyon
Highway
Colorado River
Steel Arch
Grand Canyon
Grand Canyon
At the time of its construction, the Navajo Bridge was the highest steel arch bridge in the United States, and for the next 66 years it served as the only crossing of the Colorado River for 600 miles.
Image Credit
Courtesy Flickr/Frank Kovalchek (CC BY 2.0)
Image Caption
Navajo Bridge